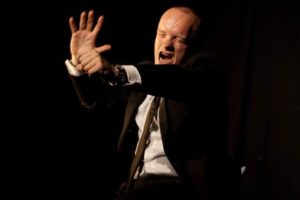 Internationally acknowledged South African hit coming to a Garden Route near you!

Having gone their separate ways for almost a year, the poker club are back together to bury their mutual friend.

On a journey from Johannesburg to Cape Town the trio trade insinuations, insults, and injuries as they try to dig up the past and bury the present.

Driving high-speed through some painful, poignant and often hilarious territory, they arrive at the graveside with some serious injuries and some surprising insights about the nature of male friendship.

It might not change your life, but it changed mine. – Zane Henry, The Argus
Nothing short of a triumph – Peter Tromp, Another 48 Hours
It is phenomenal!! – yoursoapbox.co.za
A masterclass in solo stagecraft – Karen Rutter, Cape Times
Cairns is so good at what he does it’s almost ridiculous. – artsblog.co.za