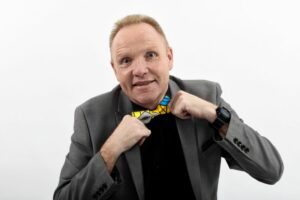 In the beginning of the year Andre The Hilarious Hypnotist announced that he was doing his farewell tour of South Africa as he prepares to immigrate to the UK. This was long before the words “lockdown” became a commonly used phrase and in keeping with his promise Andre The Hilarious Hypnotist returns to the Guild Theatre for what could be his last season at this Theatre, 28 years after he first set his feet in East London, the city that has become his favourite place to perform .

Andre’s show will be at the Guild Theatre from 27-30 October 2020 nightly at 7:00pm, presenting his normal mix of Hilarious Hypnotic entertainment but it does not stop there. Andre has added a twist to the show as he prepares to read people’s minds. Yes you have read correctly, not only will Andre have the audience jumping around on stage impersonating everything from a Washing-machine to Superman but he will also have predicted the outcome of the entire evenings performance at the end of the show.

It’s a step in a different direction for Andre who will be featuring this new addition to the show for the first time at the Guild Theatre but Andre believes he will successfully astound, amaze and entertain the audience as he risks the success of the entire show on a prediction made at the beginning of the evenings performance.