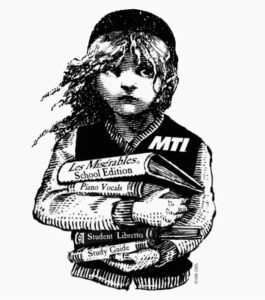 The SCHOOL EDITION is an ever so slightly compacted version of the highly successful musical based on French poet and author Victor Hugo’s novel of the same name. The musical theatre version was adapted with music by Claude Schonberg, original French lyrics by Alain Boublil and Jean-Marc Natel, and original English lyrics by Herbert Kretzmer (originally from South Africa).

The English-language musical, produced by Cameron MacIntosh, ran in London from 1985 to July 2019, the longest running West End musical and the sixth-longest running Broadway musical of all time, with more than 70 million viewers and over 100 awards gained during its run.

Macintosh was instrumental in developing the SCHOOL EDITION to provide a platform for young actors and singers to tackle the challenging production. It is licensed by DALRO, in association with Musical Theatre International (MTI).

Set in early 19th-century France, Les Misérables is the story of Jean Valjean (Travis Bhana), a French peasant, and his desire for redemption after serving nineteen years in jail for having stolen a loaf of bread for his sister’s starving child. Valjean decides to break his parole and start his life anew after a bishop inspires him by a tremendous act of mercy, but he is relentlessly tracked down by a police inspector named Javert (Reef Funston/Justin Julies). Along the way, Valjean and a slew of characters, including the desperate but hopeful Fantine (Sihle Ngqe/Yamkela Booi) and the charismatic leader Enjolras (Bryce McCarlie), are swept into a revolutionary period in Paris, where a group of young idealists attempt to overthrow the government at a street barricade.

Stirling High School breaks new ground in terms of its dedication to the dramatic arts and theatre, becoming the first school and/or amateur company to stage LES MISERABLES in its entirety in South Africa. The sung-through production includes an extremely strong and talented young cast of learners, as well as an experienced and dynamic production team. The show is directed by Marcel Corson, with musical direction by Kay Mosiane and Jacques Du Plessis serving as Band Master.

LES MISERABLES: SCHOOL EDITION is set to run from 25-29 February 2020, with more details on ticket pricing and booking to follow. Tickets are available through Computicket.

Do not miss out on this East London theatre revolution!

TICKETS AVAILABLE FROM COMPUTICKET AT