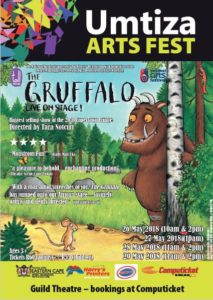 The Gruffalo is coming to East London! Umtiza Arts Fest will host the city’s premiere of the hit musical adaptation of the award-winning book The Gruffalo, with an all-Grahamstown cast.

Directed by Tara Notcutt, the South African version of The Gruffalo: Live on Stage! will feature all the characters, songs and storyline from the smash hit West End production, with a uniquely local feel. The production brings all your favourite Gruffalo characters to life, taking you on a wondrous adventure into the deep, dark woods.

The picture book The Gruffalo, written by Julia Donaldson and illustrated by Axel Scheffler, is a worldwide phenomenon, having sold over 13 million copies in 58 editions worldwide. It has been translated into dozens of languages, including Portuguese, Dutch, Italian, Russian, Turkish and Afrikaans. An isiXhosa version of the book, and the musical, are in the pipeline as part of the Festival project.