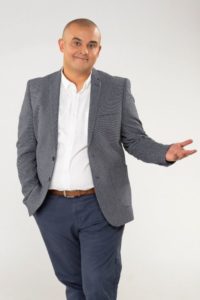 Rising star of SA comedy, Alfred Adriaan delivers his one man show, “Dating Life” at the Guild Theatre in East London on the 01st June 2019.
Alfred has shot through the ranks of local comedy, garnering no less than five coveted Savanna Comics Choice Awards nominations in four years and invitations to perform in New York City and Sydney.
This first outing chronicles his formative years in the Eastern Cape hamlet of Hankey, and his calamitous transition to the relative metropolis of Johannesburg, and the dating of its residents. Spoiled handicap children, awkward sexual encounters and drunk potential parents in-law all conspire to wreak havoc on this bright and humble odd-ball’s twenties and thirties. Get a blow by blow account, laid out in hysterical detail and delivered in the loveable, frenzied and incredulous style quickly taking Adriaan to the top of the comedy heap.
Add to the difficulty of finding the ultimate partner – pressure from a concerned family, mounting as friends marry themselves off like lemmings heading for a cliff, as his mother sets the bar impossibly high for any woman brave enough to attempt it. Just when this walking sitcom seems doomed, enter “the one”. Watch as Alfred outlines a whole new set of anxieties, frustrations and terrors brought on by his dream partner, their courtship, marriage, and the arrival of World War Three – (Ethan.)
Dating Life is a must see for single and married couples. A great night out for adults with a wicked sense of humor and some life experience.