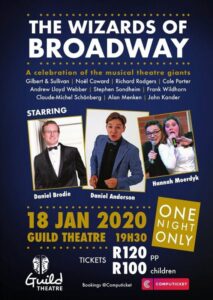 “Wizards of Broadway” is a cabaret that plots the phenomenon of musical theatre, as we now know it, by paying tribute to some of its influential founding composers. It tracks these musical wizards not for who they are, but for what they have done to conjure up the perfect recipe that makes the musical form so popular and loved.

It launches from the founding composers of the art form: Gilbert & Sullivan, Noël Coward and Cole Porter and then migrates to the golden age of musical theatre, celebrating Mr Richard Rodgers. Next, Sir Andrew Lloyd Webber takes the spotlight for his development of the through-sung musical form and its contribution to a new direction for musical theatre. The show then explores, amongst others, the influences of Stephen Sondheim and John Kander. It ends in the whimsical world of Alan Menken’s Disney musicals.

With only one piano and two voices, the show promises creativity, energy and humour as it pays homage to the musical theatre industry’s greatest names.

TICKETS ARE AVAILABLE FROM COMPUTICKET AT R120 – ADULTS AND R100 – CHILDREN