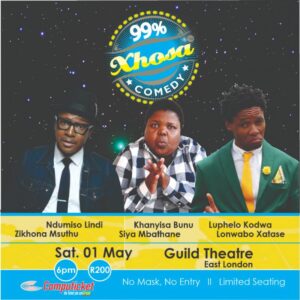 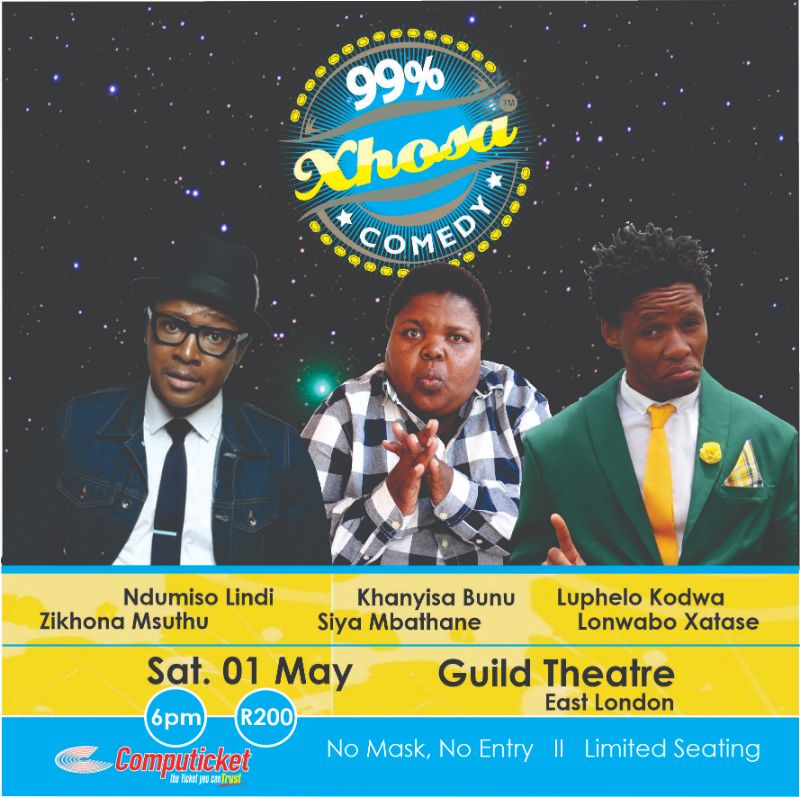 99% Xhosa Comedy, SA’s number one vernacular and one of the biggest stand-up comedy brands in the country, visits the Guild Theatre on Saturday, 01 May for the first time in three years with an awesome line-up under one roof.

This hugely popular show will feature a mixture of experienced and newbies on the line-up that includes some of the local acts and highly successful comedians whose common goal is to leave the Buffalo City in stitches.

This Covid-19 comedy special will be hosted by Buffalo City’s very own, Ndumiso Lindi, who was born and bred in Zwelitsha Township, King Williams Town.

Ndumiso Lindi – or ‘Roosta’ to his friends – has become known as the gentleman of the South African comedy circuit.  He is a brilliant comedian whose accessible and well-constructed narrative has endeared him to audiences of all races across the country.

“I learnt early on that I had to understand my audience in order to appeal to them,” says Lindi.

His intuition and intellect has given him a firm grasp of his nation’s collective funny bone, allowing him to appeal to a huge spectrum of the population.

Ndumiso’s novel blend of nu-school style and solid tradition makes for a brilliant and outstanding South African comedy act. His deep voice, soul-warming smile, booming laughter, original content and seamless delivery leaves you proud to be African and laughing from the belly.

As a young school boy watching Barry Hilton do a stand-up comedy show, Ndumiso Lindi had no idea what stand-up or comedy was all about. All he knew was that the show intrigued him and the thought of standing on stage and entertaining people with your life experiences seemed like a very cool thing to do.

Fast-forward to 2000 and Ndumiso began studying at Cape Technikon, living in digs and meeting new people every day. Without knowing it, he was honing his skills each day as he enjoyed being the raconteur of his group and making his friends laugh through his own brand of down-to-earth, thoughtful comedy.

In 2001, his best friend urged him to enter a lunchtime comedy contest at the Technikon. Ndumiso was reluctant, but thanks to a little encouragement from his friends, and the fact that he could win a free phone, Ndumiso found the courage to enter. He won! The rest, as they say, is history.

First introduced in his home Province as a comedian through the 99% Xhosa Comedy, Ndumiso now delivers his special blend of comedy magic not only to a local audience but has performed across Africa including Botswana, Ghana, Nigeria, Uganda and Kenya. He’s also played to rave reviews in the UK and USA.  A highlight to Ndumiso’s comedy career was being invited to perform at the Montreal Comedy Festival in Switzerland.

He is an expert at capturing characters and moments directly from life around him and sketching himself for the amusement of his fans. His inspiration comes from what he knows – his family, his experiences, his culture and his music.

His sold out second one-man show, “Diluted People”, followed on the success of his first show, “Colour Mine” which was aired on Comedy Central Africa.  And most recently, Ndumiso has teamed up with the leading lady of comedy, Tumi Morake, in a hilarious new show called ‘Married But Not To Each Other’ – a hilarious take on the roles and regulations of marriage and the pothole-laced roads the sexes have to navigate within the world.

In addition to his stand-up work, Roosta has become widely recognised as the face of pizza brand Debonairs’ TV ad campaign; which involved a series of ads featuring various “AmaZing” pizza chefs and celebrities. He also kicked off his TV presenting career by hosting a couple’s game show on Mzansi Magic. Ndumiso also regularly MC’s corporate and private functions and has become quite the sought-after act for private functions and corporates.

A limited number of tickets are available from Computicket at R200 per person.

PLEASE NOTE: that all patrons will be subject to Covid health screening upon entry and are required by law to wear a face mask and maintain social distancing in the building at all times.