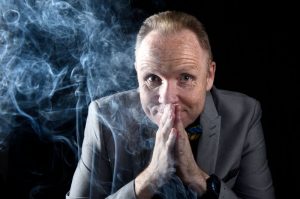 But just in case you were not in town Andre is better known for what he gets people to do rather than what he does. Andre asks for volunteers from the audience which he hypnotises and then gets to take part in various strange, funny, hilarious hypnotic suggestions.

Andre started his career after attending a show of his mentor the late Max Collie and he instantly knew he found his career. Following a meeting between the two parties and many years of practical training Andre The Hilarious Hypnotists show was born. Andre became the first and only show to sell out the Guild Theatre for a period of three weeks and Andre is as popular now as he was back in 1994 when he first visited the Theatre.

Andre describes the success of his show due to the fact that no two shows are ever the same and not even Andre knows what to expect. It’s this unfamiliar environment that makes the show that much more exciting as you never know what is about to happen and this is where Andre’s training in Theatre and Comedy plays a important role.

Andre Now lives in the UK where he performs at Theatre’s across the country but South Africa remains his country and he promises to be back year after year. If you feel like a night of pure entertainment pleasure, a laugh a minute performance or even thinking of becoming the star of the show Andre The Hilarious Hypnotist promises to provide you with high quality entertainment, hilarious fun and no two shows that are ever the same.

Andre Will be performing at the Guild Theatre from Tuesday the 30th August until the 3rd September. Tickets are available online at Computicket or from any Shoprite and Checkers outlets.