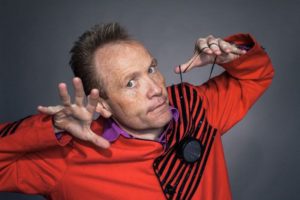 HILARIOUS HYPNOTIST CELEBRATES 25 YEARS.
Andre The Hilarious Hypnotist celebrates a record breaking 25 years on stage as South Africa’s very own convener of the strange weird and wonderful. Andre discovered his hypnotic calling after watching a performance of the late Max Collie in action.
Having already studied drama, teaching and with a background in psychology, Andre immediately became hooked at the promise of being able to entertain people on stage with his hilarious hypnotic skills and that is exactly what he has been doing for the past 25 years.
No two shows are ever the same as the shows strength lies in the fact that every night’s volunteers are completely different, leading to a diverse hilarious action-packed evening performance. With every person reacting differently to Andre’s suggestion, not even Andre knows what to expect when he steps up on stage.
Andre does, however, promise not to disappoint and the audience can expect two hours of side splitting hilarious Hypnotic entertainment from their very own community as Andre takes to the stage.
At the end of the day the strength of the show lies on the volunteers of the evening and that is what makes Andre’s show such a feel good, funny, hilarious evening’s entertainment. It truly the only show in the country that can claim that it makes stars of your friends and family.
Catch Andre’s show at the Guild Theatre for a short season starting on Wed 5 September – 8 September. Tickets for all shows can be purchased at Computicket or at the Theatre.