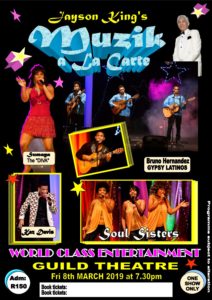 Jayson have performed all over South Africa over the past 25 years with his production of The Great Pretenders, one of the most notable tribute shows with a musical lifespan from the 60’s to the present time
.
“MUZIK a la CARTE” is a “Tribute Show” featuring some of Cape Town’s popular faces and new acts, some returning from performances at 5star hotels in Europe.
JAYSON KING is the Host and lead singer who was acclaimed “Mr Showbiz” by the Star (Jhb) during 2003 while appearing at Gold Reef City casino for 7 months
King will perform songs of Elvis Presley, Engelbert Humperdink, Julio Iglesias and Frank Sinatra. Jayson has for many years been renowned for his falsetto voice singing “Unchained Melody”

The Soul Sisters from Khayalitsha also returning from Europe will sing a tribute to the late “soul queen” Aretha Franklin with “Respect”, “You make me feel like a natural woman”, “Think” and “Shake a tail feather”. The Soul Sisters will probabiy be the show stealers on this production with Belinda and Steve Ashley being very strong contenders

Guest artist is Steve Ashley former lead singer of 60’s band Stacattos. Steve is renowned as the best Tom Jones tribute in SA with his hits “Thunderball” – “Green green grass of home” – “Goldfinger and so many more golden classics

Crowd favourite the sensual, provocative Sumaya Hendricks nicknamed the “Jive bunny” comes back with renditions of Karen Carpenter, Gloria Gaynor and Gloria Estefan.
Kaz Davis is the newcomer with soulful sound a smooth soul style. Audiences everywhere fall in love with his style.
Showstopper Belinda Qaqamba Fassie, will bring the roof down with her versions of “I will survive”, Grace Jones’
“La Vie en rose” and Miriam Makeba’s “Pata Pata”. Belinda has been wowing audiences all over SA with her exciting impersonations.

This is Entertainment and a “MUST SEE” show for all music lovers All costumes are styled and designed in true Las Vegas fashion by Jayson. Close to 100 costumes are worn in this exciting non-stop music “Revue” which is pulsating, rhythmic and true “nostalgia in a tin”.

VOUCHERS CAN BE EXCHANGED AT ANY COMPUTICKET OUTLET FOR A TICKET