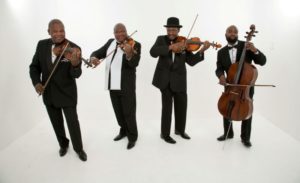 The Suite for the South Africa we deserve live at the Guild Theatre East London at the 2019 Umtiza Arts Festival.

Formed in 1978 with its origins in Soweto, SSQ remains one of South Africa’s enduring groups of cultural ambassadors who have flown the national flag proudly to stages across the globe. Famous for their attire which resembles one of South Africa’s big 5, the zebra, not only do they have jaw-dropping anecdotes about the evolution of the identity of our young nation, but their adventures include trips abroad in the presidential jet with our first head of state, Tat’uNelson Mandela.
The sound is fresh, vibrant and funky, not what you’d expect from a string quartet, but a sound that the SSQ delivers with panache and enthusiasm. Some puritans would say: “You’re not supposed to grin from ear to ear and tap your foot to the music!” Nelson Mandela allegedly played their CD in his office all the time. His assistant is reported as saying: “The old man loves it!”
Very few musicians are capable of producing sounds that are loved by all ages and get the whole family dancing. The Umtiza Arts Festival which is one East London’s family-centred cultural extravaganzas provides a dynamic audience wherein SSQ will feel right at home. As carriers and guardians of South Africa’s multicultural identity, SSQ are best placed to take the whole family on a time lapse from the dark past into the dawn of our democracy, through the complexities of the present and looking further afield into the imaginary of the South Africa we deserve.
This is a chance for the whole family to be in touch with our past, present and future in real time, through story-telling, dance, singing, clapping and finger snapping. This is a musical celebration of a society embarking on a just transition. On the 2nd of March SSQ performed with Lori Rothman at Woedfees 2019 at Spier Amphitheatre in Stellenbosch. An award ceremony that took place on April 4 saw nominees who performed at the festival walk away with various awards. It was here that SSQ scooped the award for best contemporary music by popular votes. On the 24th of March SSQ brought their magic to the Klein Karoo Arts Festival in Oudsthoorn and on 26th April their calendar will see them at the Artscape Music Festival with Anton Goosen, Lynnel Kenned, Sonja Herholdt and Early B.
On the 31st May 2019 East London will also share in the spoils of the preservation of this uniquely and proudly South African music with songs like Khwela and Mbube from the bows and strings of these fathers of our nation. The programme will include performances, workshops, family photos, autographs and lots of anecdotes from the wonderful travels of this distinguished ensemble. Blurring the lines between the binaries of genres such as classical and jazz, the SSQ songbook has something for everyone. And this time they will remind us once again of the beautiful country we inhabit and inspire us to remain committed to the pursuit of that South Africa we all deserve.

TICKETS AVAILABLE FROM COMPUTICKET AT R160