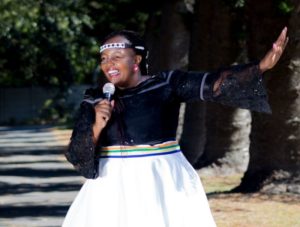 Yolanda Mamntlane Vutela is a National Gospel Musician married to Butho Vutela who is also a National Gospel Artist. Young entrepreneurs owning Music shops and music stands that sells ‘Music, books, bibles, preaching. Yolanda’s career in music started at a very young age at church like many most musicians. In the year 2001 she was very blessed and fortunate to be amongst the very few musicians that were trained by the well-known music legend “Mthunzi Namba” of Joyous Celebration through an Eastern Cape gospel group called “Sibabalwe Gospel Group” that was funded by an Eastern Cape business man from her church. And 2011 she released a second album titled “Kumele Adunyiswe with songs like UnguJehova Okhathalayo”
This year she is furthering her music career by doing a live recording for the first time in the Eastern Cape.
Yolanda has worn many awards including Gospel Crown awards & Ingoma Best Female Award.
Yolanda is currently furthering her studies with UNISA doing BA in Community Development.