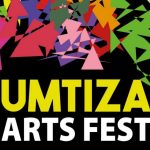 In 2016 the Guild Theatre approached the East London Museum and the Ann Bryant Art Gallery with a view to staging an annual arts festival in order to highlight the cultural offerings of the city.  It was acknowledged that arts and culture are a vital part of flourishing communities and have a role to play in growing local economies.  Following this initial approach a steering committee was established in order to drive the project and an inaugural East London Arts Festival was held in July 2016.  There was a minimal budget for this first festival but in spite of this it was relatively successful and led to plans being drawn up for this event to take place on an annual basis.

In 2017 the Festival was renamed the Umtiza Arts Festival after the Umtiza Listeriana –  a tree only found in the Eastern Cape in the area between East London and King William’s Town.

The Guild Theatre and the East London Museum are situated in the same precinct, while the Ann Bryant Art Gallery stands a few blocks away, so it is relatively easy to create a festival atmosphere.

The Guild Theatre offers a wide variety of entertainment during the three days of the festival – jazz/classical/gospel music, comedy, cabaret, children’s shows, etc. – while the Ann Bryant Art Gallery mounts exhibitions featuring national artists as well as up-and-coming young local artists.  The East London Museum offers free entrance to the Museum for the period of the festival as well as lectures on various topics.